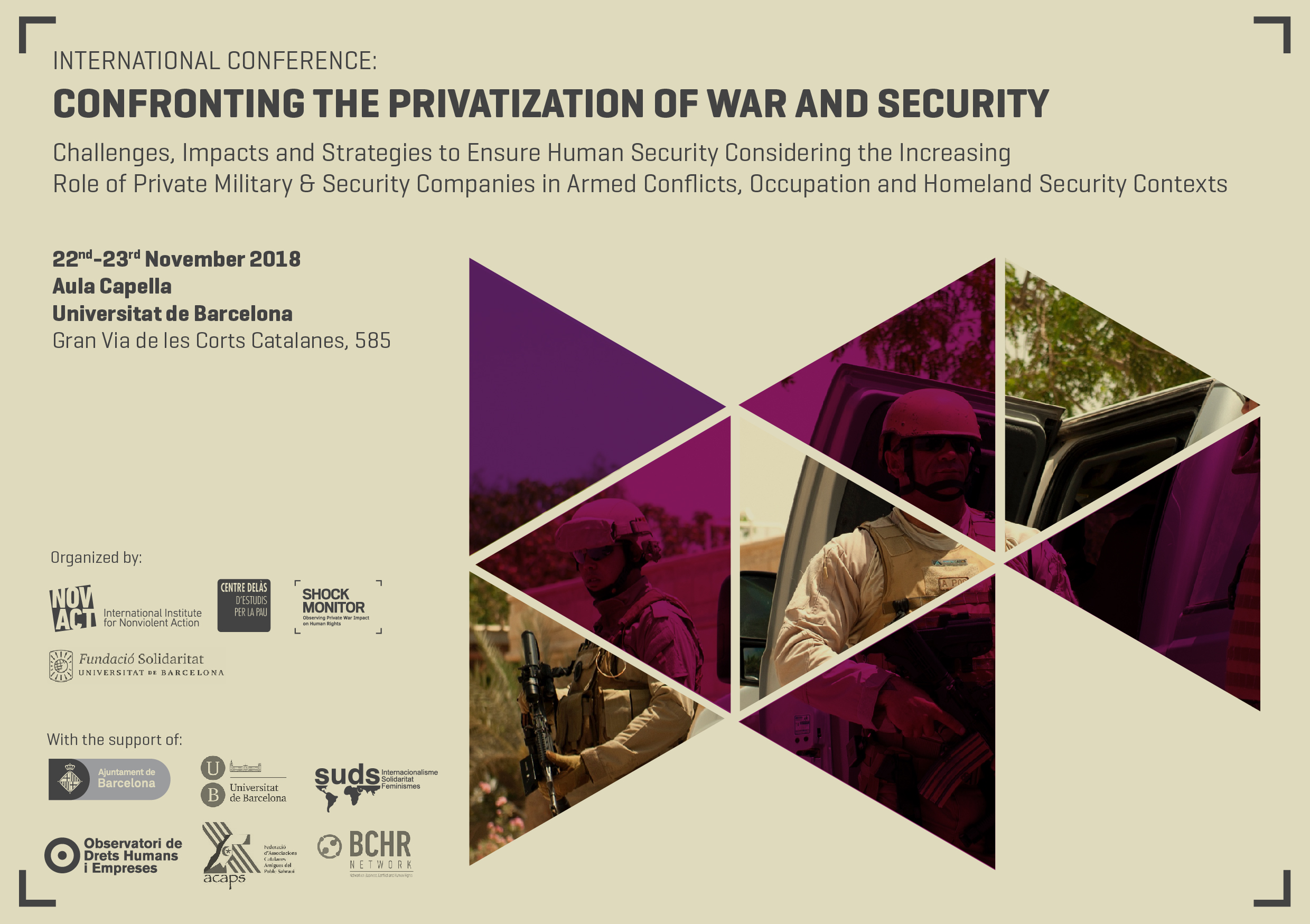 The International Conference Confronting the Privatization of War and Security, held in Barcelona on November 22nd-23rd 2018, aims to raise awareness to the increased participation of Private Military and Security Companies (PMSCs) in conflict and homeland security settings.

Currently, citizens around the globe are facing an increasingly complex international scenario where business interests and politicking are convoluting modern warfare, enabling the entry of privately held corporations with increased firepower and highly specialized training into conflict. Based on the proliferation and fragmentation of non-state armed actors, these corporations involved in war and conflict settings have capitalized on (in)security as a new way of business.

Considering its potential externalities, it is urgent to promote joint research, to raise public awareness and to advance effective advocacy work on the implications that the privatization of war and security can have on the democratic control of security policies and overall respect and protection of human rights worldwide.

To build new narrative on public security based on the exercise of fundamental rights and freedoms through the collaboration of scholars and academia, civil society organizations, human rights defenders and people affected by violence in conflict zones

To develop and create an international and multidisciplinary hub to limit the privatization of war and security with the aim of advancing research agendas, raise awareness, integration of advocacy work through the participation of civil society organizations, working groups, platforms, specialized researchers and human rights defenders and their consolidated networks

Intended Audience: We address these sessions to international civil society organizations and their respective networks, working groups and task forces focused on business and human rights; national and international members of academia; think tanks and practitioners dealing on issues in security, peace and conflict; as well as students and the general public interested in the process of privatization of war and security, armed conflicts, occupation and homeland security contexts.

Open sessions (Day 1): Please confirm you participation to This email address is being protected from spambots. You need JavaScript enabled to view it. and +34935513292.

10:00 – 11.30 Session I: The Phenomenon of Privatization of War and Security – State of the Art, Challenges and Limitations.

12.00 – 14.00 Session II: Presence and Impact of Private Military and Security Actors in Conflict and Occupation Zones in the Mediterranean region.

16.45 – 18.15 Session IV: Strategies and Alternatives to Confront the Privatization of War and Security and Ensure Human Security

END OF THE CONFERENCE

Day 2 –  CLOSED SESSIONS: Lay the foundations for the creation of an international hub to confront the privatization of war and security