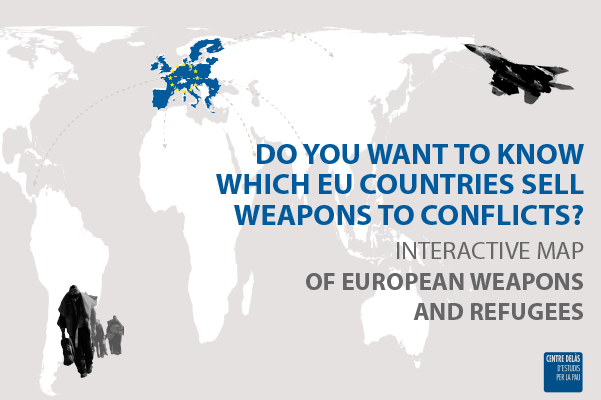 The purpose of this interactive map is to highlight the link between European arms export and flows of refugees and internally displaced persons, in order to determine whether there is any direct or indirect responsibility of EU Member States for situations of insecurity and violence that drive millions of people to flee their homes every year.

A second objective of this tool is to stress their (ir)responsibility in European arms export authorization or realization as well as their inadequate compliance of the existing legislation, established by the Common Position 2008/944/CFSP of December 8, 2008, which sets up 22 weapons categories including ammunition, light weapons, aircraft and warships, military transport vehicles and all types of military technology for military purposes. On the basis of the criteria set out in the Common Position, the relationship between the European legislation on arms export and situations of insecurity leading to movements of refugees and displaced persons can be established.

Over a given period of time (one or several years, depending on the selection made), the map shows the volume of arms export authorized – i.e. licensed – and realized – i.e. carried out – by the countries of the European Union between 2003 and 2017. It indicates the arms categories concerned and the volume exported in countries with relevant figures of refugees and internally displaced persons during the study period, according to the European Network Against Arms Trade (ENAAT) database and UNHCR's annual "Global Trends" reports analysing forced displacement around the world.

The map also indicates whether the selected country receiving European armaments is in a situation of armed conflict and / or tension during the period under review according to the definition given by the Escola Cultura de Pau in its “Alert!” annual reports on conflicts, human rights and peace-building. The relevance of this last variable relates to the fact that according to criterion 3 of the Common Position PESC/944/2008, it is prohibited to deliver export licences for defence, military equipment to countries in situation of tension and/or armed conflict.

Data can be displayed as table, graphic and map, and be downloaded in different formats.

HOW TO USE THE MAP:

First, you must use the “country search bar” (dedicated to recipient countries) or click on the map to select a country; then you must select the type of arms export and the period or the year you want to study.

1st: Select the recipient country of European armament by typing in the search bar or by moving the mouse and selecting it directly on the map.

3rd: Choose a year or an entire period with the cursor under the map.

4th: The results will appear with different graphical and numerical representations:

- Map highlighting, during the chosen period, EU arms exporting countries and countries receiving these arms, including the selected country, which will be garnet in color.

- Graphic integrating the three studied variables: Values of authorized and realized weapons export; Number of refugees and internally displaced persons; Situation of tension and / or armed conflict during the selected period or year.

- Table with the value in Euros of the total European arms export authorized and realized, the number of refugees and internally displaced persons, per year in the selected country, downloadable in CSV and HTML format.

- Table Ranking of EU countries exporting the most arms to the country selected, indicating the value of weapons export authorized and realized, per year and per exporting country, downloadable in CSV and HTML format.

This resource has been developed with the support of Àrea Metropolitana de Barcelona, Diputació de Barcelona and Ajuntament de Sant Cugat del Vallès.