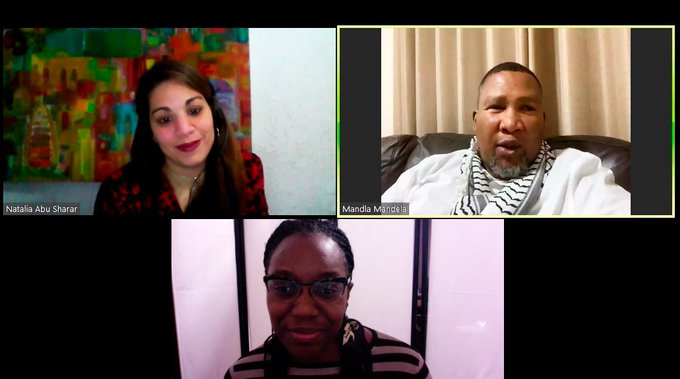 On March 19, the conference "Apartheid talks from South Africa to Palestine" was held by videoconference, due to the recommended security measures to reduce the spread of Covid-19. More than 1,000 people from 38 countries participated.

The event, part of Anti-Apartheid Week, coincides with the International Day Against Racism on 21 March, which this year commemorates the Sharpeville massacre in South Africa when police opened fire on a peaceful demonstration protesting against apartheid, killing 69 black people and injuring 180 others.

The tribal chief and member of the ANC (African National Congress), Mandla Mandela, a reference in the anti-racist and anti-apartheid struggle in South Africa, and also an active defender of the rights of the Palestinian people and of the Boycott, Divestment and Sanctions (BDS) campaign against Israel. A dialogue took place with the anti-racist and afro-feminist speaker Desirée Bela. The event was presented by Natàlia Abu Sharar, President of the Palestinian Community of Catalonia.

The conference was opened with an emotional speech by Natalia Abu Sharar, president of the Palestinian Community of Catalonia, who began by making a note of the current context, pointing out that this situation of confinement that we are experiencing due to the Covid-19, is similar to the situation that the Palestinian people are experiencing on a daily basis. During the conference, which was held as a dialogue between Mandela and Bela, essential issues regarding the anti-racist struggle were introduced. Bela stressed how racism deeply affects the development of many people's lives. The speaker also pointed out the situation of institutionalised racism growing in many countries, such as the construction of kilometres of fences on European borders, which criminalise migrants and refugees. Bela also found a moment to recall the words of Desmond Tutu: "if you are neutral in situations of injustice you have chosen the side of the oppressor"; as well as to point out the universality of the struggles, mentioning that there cannot be an anti-racist struggle that is not also feminist.

The dialogue with Mandela began by asking him whether Israel is behaving like a racist state. In this regard, Mandela noted that there is indeed institutionalised racism, systematic control of Palestinian life, theft of crops, restrictions on agricultural and productive life and illegal annexations of Palestinian land. Mandla highlighted obvious parallels with South African apartheid, in a state that declares itself to be "the only democracy in the Middle East," yet denies Palestinian people access to political power in order to change the status quo (Israel is defined as a Jewish state, automatically denying rights to the non-Jewish population), while ignoring UN resolutions.

Bela pointed out that this apartheid regime exercised by Israel would not be possible without the support of the international community, to which Mandla added that the position of the majority of governments is certainly surprising when in fact a large part of the international community has approved resolutions at the UN in favour of the Palestinian people, and that, in addition, there is a great support from civil society, as shown by the existence of the BDS campaign. In this sense, Mandla wanted to highlight two important issues: first, the need to make effective the boycott of companies that allow, collaborate and benefit from apartheid, as happened in South Africa; and second, the need for a union of oppressed peoples, starting with the union of the Palestinians themselves. "The unity of the oppressed is crucial," said Nelson Mandela's grandson, as it was in South Africa, where protest movements attracted worldwide attention.

Mandla ended with a strong message: "Apartheid is a crime against humanity". And he appealed to the unity of the people, to the role of Africans and their ability to connect to Palestinian suffering from their own experience with colonialism and from the struggle against brutal and oppressive regimes, a fight that is not possible without the support of other peoples. "We must not rest until we achieve a free Palestine as well".

The videoconference, which was followed by up to 1,000 people from 38 countries around the world, was organized by the Catalan entities, SUDS, Servei Civil Internacional and Centre Delàs d’Estudis per la Pau, as well as the Coalició Prou Complicitat amb Israel, and had the support of several organisations and institutions, such as La Fede, the Institute of Human Rights of Catalonia or the Centre for African and Intercultural Studies, among others, as well as the Barcelona City Council and the Catalan Agency for Development Cooperation. The event was organised in coordination with organisations from Rome, Paris and London, as Mandla Mandela was unable to make his European tour due to the current situation; BDS Italia, Solidarita por la Palestina, BDS France and Palestine Solidarity Campaign.