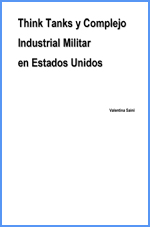 Think tanks y complejo industrial militar
This work claims to offer an analysis of the structure and the three functions of the most important think tanks and represented by the United States, all of the voices in Washington. The three, although have different political views, have the explicit missions to defend and promote the interest of North Americans in the world, and to consolidate the US hegemony as the absolute power of the 21st century.
Author: Valentina Saini.
You can download the report here in Spanish. Soon in English and Catalan.