What world after Hiroshima?

Commemorating the 70th anniversary of the atomic bombing and demanding the prohibition and abolition of nuclear weapons.

In Japanese Hibakusha refers to the survivors of the 1945 atomic bombings of Hiroshima and Nagasaki. seventy years after the greatest nuclear tragedy in human history, the arsenal of nuclear weapons continues to be estimated at 17,000 bombs. If even a fraction of these bombs gets used they will destroying all life on Earth.

In the interest of informing the populace of the dangers that these nuclear weapons still represent for all of us, the Hibakusha tell their stories, and struggle for the creation of global peace, justice, and a world without nuclear weapons.

The Study Centre for Peace J.M. Delàs, in collaboration with the International Peace Bureau and Gensuikyo, is honored to organise, in the presence of  survivors of Hiroshima, an act commemorating the 70th anniversary of this nuclear bombing, and to call for peace and the nuclear disarmament. As an activity organized in the frame of the International Campaign to Abolish Nuclear weapons (ICAN), the goal is to raise public awareness of the dangers that nuclear weapons represent for humanity, and increase support for a treaty prohibiting nuclear weapons. 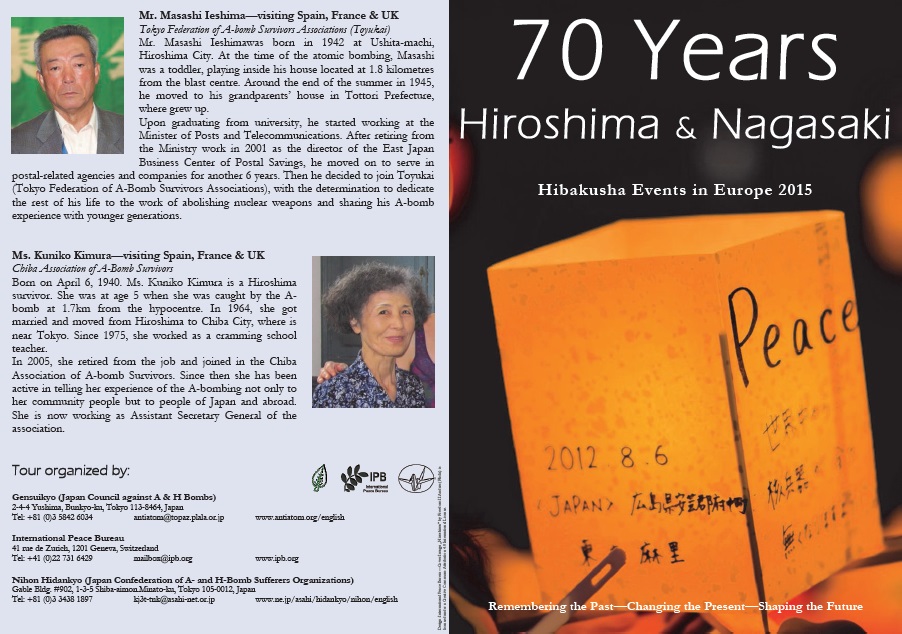 Biographies of the Hibakusha:

Masashi was born in 1942 in Hiroshima. At the moment of the bombardment, Masashi was three years old and was playing inside his house 1.8 kilometers from the center of the blast.  As a survivor of the bombing of Hiroshima, Masashi decided to join Toyukai (Tokyo Federación of Associations of Survivors of the Atomic Bomb) to work to abolish nuclear weapons. He works to share his experience with younger generations.

Kuniko was born in 1940 and is a survivor of Hiroshima. She was 5 years old when the atomic bomb was dropped on her city. Luckily, she was 1.7 kilometers from the epicenter and survived the nuclear attack. In 2005, Kuniko joined the Association of Atomic Survivors in Chiba (close to Tokyo) and since then has worked to as an activist for for the abolition of nuclear weapons. Her mission in life is to tell her story to people in her community, in Japan, and overseas, and works as the general secretary of the Gensuikyo association.

To learn more about the danger of nuclear weapons

Centre Delàs participates in the International Campaign to Abolish Nuclear Weapons (ICANW). This campaign fights for the drafting of a treaty banning the use of nuclear weapons worldwide and it is ratified by the governments of different countries. The aim of the Centre Delàs is to give more impetus to an initiative that, through coordinated action of several institutions in the world, aims to completely eliminate nuclear weapons given the enormous danger to humanity.