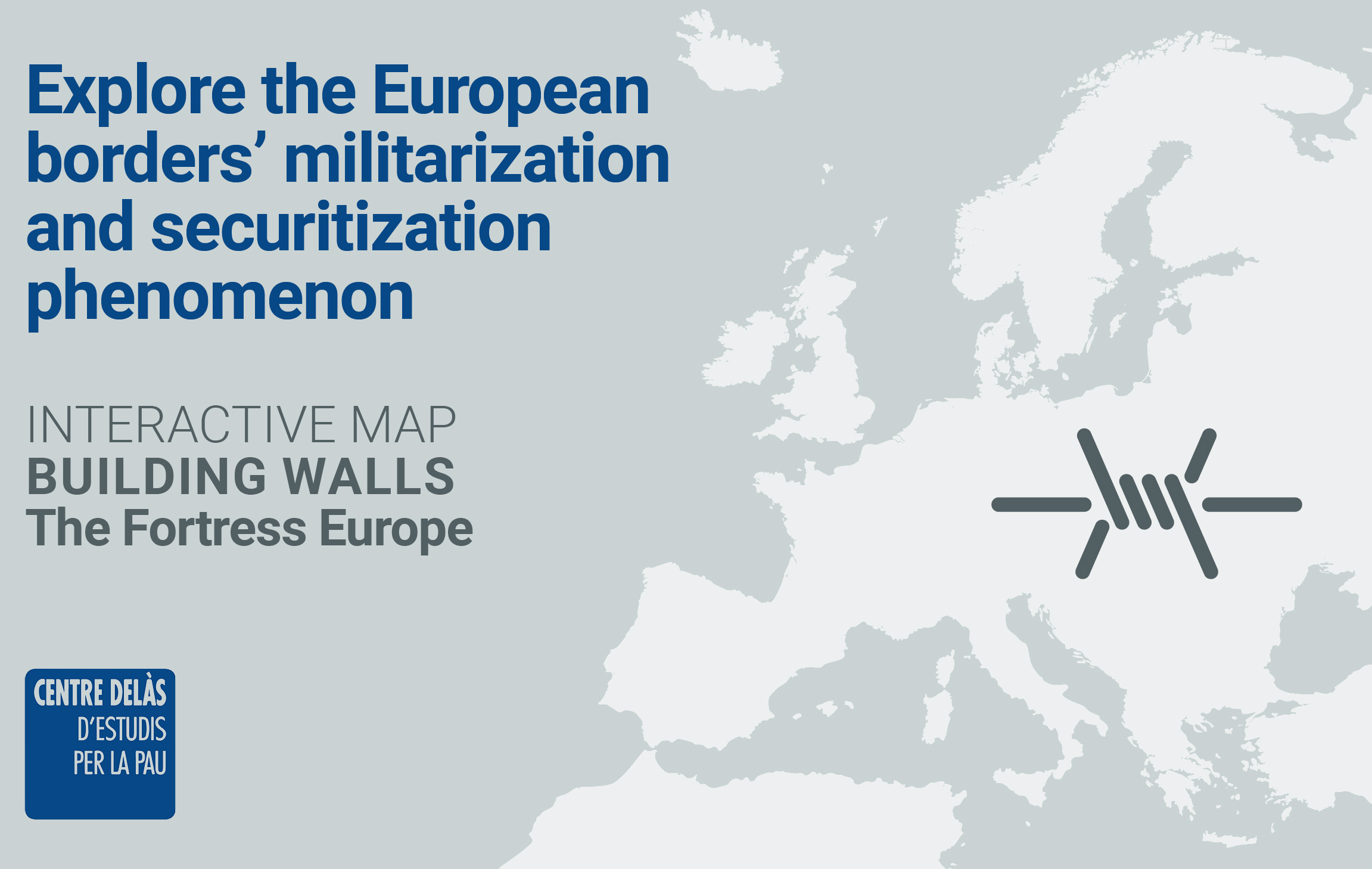 Buildings of fear, real and imaginary walls, are being constructed all over the world, causing an increase in xenophobia and creating a walled world much more dangerous for all those people that seek a refuge and safety. EU member states and the Schengen Area have raised almost 1000 Km of walls, which equals more than six Berlin walls. These walls are accompanied by even larger maritime walls deployed in the Mediterranean Sea, as well as virtual walls, border control systems that are meant to stop people trying to enter Europe, constituting the so called Fortress Europe.
The Delàs Center of Studies for Peace has developed a new interactive map with the aim of visualizing the terrestrial, maritime, virtual and mental walls that have been built since the 90s by the members of EU states and the Schengen area, with the aim to halt the migration of people forcibly displaced to Europe: an evidence of the contradictory discourse of the EU that says to support humanitarian perspective while criminalizing and securitizing this movement of people creating a walled world much more dangerous for them.
The map includes chronologically the different terrestrial, maritime and virtual walls built in the EU and the Schengen from 1980 to this day. As well as the information on the countries accession to the Shengen area and other relevant data on the policies of free movement of people in the EU and the approval of key security systems and agencies.
Each wall includes specific information on the year of creation and end of its construction or the operation durability in the case of maritime walls, as well as information on the purpose and the reason of its establishment.
In the case of the terrestrial walls, the information includes the country that built the wall, its dimensions (altitude and length), its geographical delimitation and militarization state. For maritime walls, the operation area and the country or agency in charge of its realization are detailed. And for virtual walls, it includes information about the technology type used and its purpose, as well as the year of implementation.
The map data has been obtained from the Report 35: "Building Walls. Policies of Fear and Securitization in the European Union" published by the Study Center for Peace Delàs, the Transnational Institute (TNI) and Stop Wapenhandel.
The creation of the map has been possible thanks to the support of the City Council of Barcelona and Àrea Metropolitana de Barcelona.
Access "Building walls. Fortress Europe" map here.