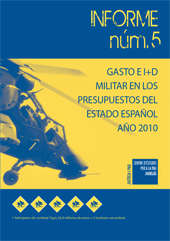 Spanish military expenditure and R&D 2010
The crisis has affected the world’s economy, especially in Europe, something that has affected different states, which have immediately decreased the welfare budget and affected the military budget. Thus, the military budgets for 2010 foresee a reduction in Europe and Spain is not an exception; the majority of the military sectors were reduced in 2010, although we have to wait for the actual budget settlement to see if there was a reduction of budget.
Authors: Pere Ortega and Xavier Bohigas.
You can download the report here in English, Spanish or Catalan.